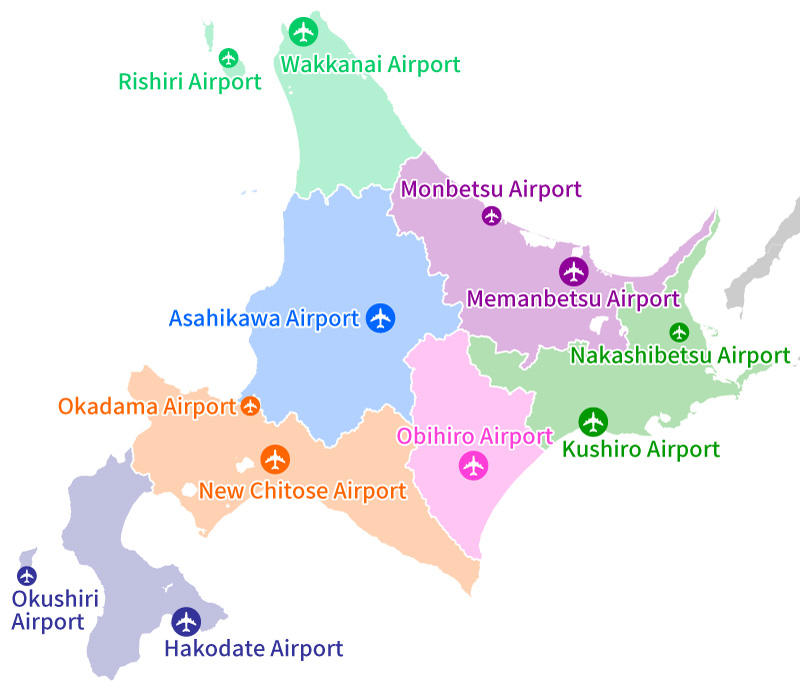 Features of the Hokkaido 7 Gateway

Your journey begins at the airport

Air travel is much likely to be your way to get to Hokkaido from overseas or within Japan. The seven airports in Hokkaido are the entry points for your journey.

Hokkaido, Japan’s northernmost prefecture, is a vast island with a total area of 78,420 km2 and a total coastline of 3,066 km, accounting for 22.1% of the country’s total land area. The island was first settled by immigrants from all over the country around 1860, so its history is still young and there is still much untouched land. Hokkaido has one World Natural Heritage area, two World Geoparks, six national parks, five national monuments, 12 Hokkaido prefectural parks, and 13 Ramsar wetlands. Furthermore, Hokkaido is an attractive and beautiful land where you can experience four distinct seasons (spring, summer, autumn, and winter).

Wetlands Registered Under the Ramsar Convention

Wetlands, ponds, etc. that are internationally registered as waterfowl habitats 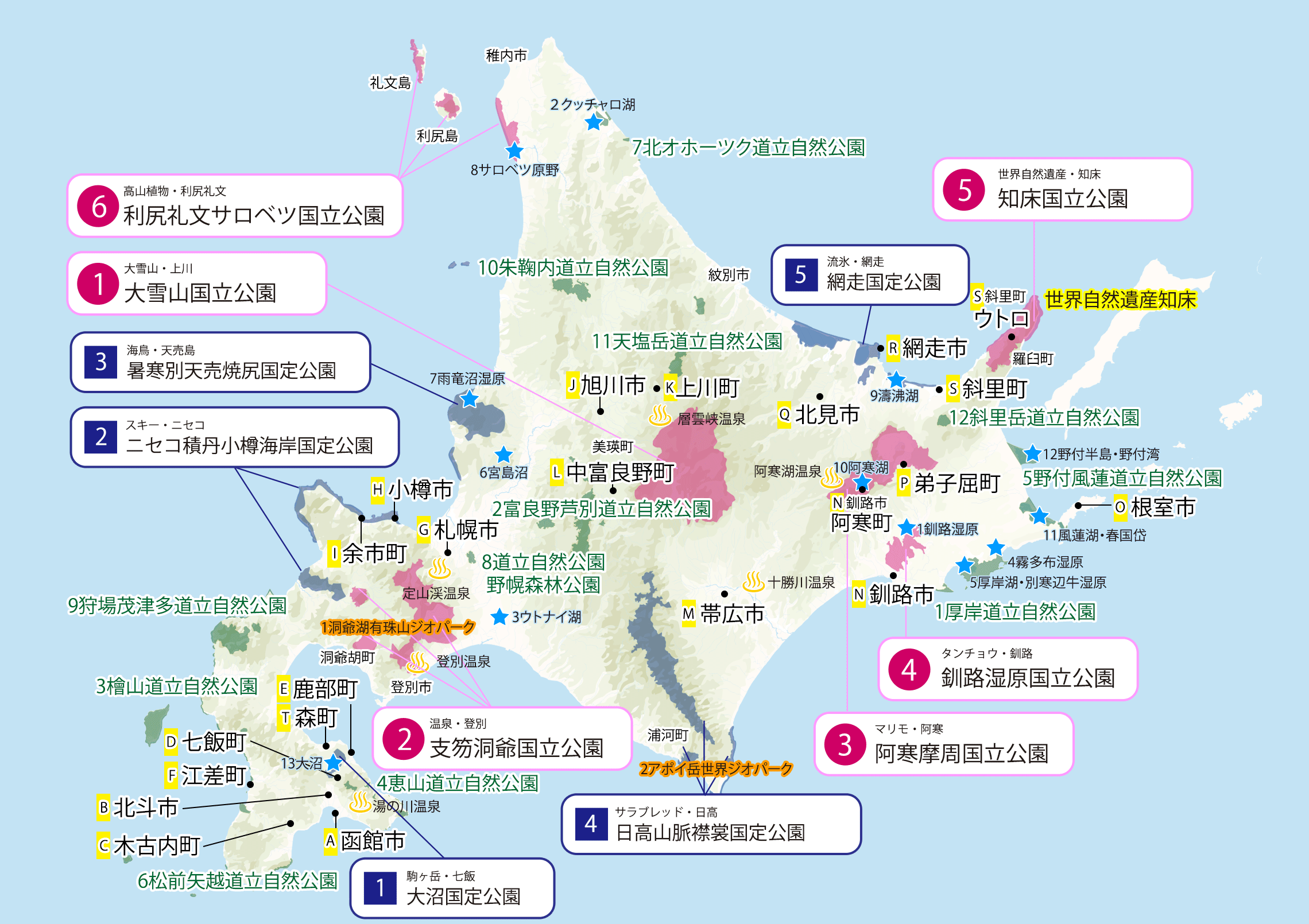 It is the only World Heritage Site in Hokkaido. Shiretoko’s five lakes, drift ice, brown bears, Steller’s sea eagles, hot springs, and waterfalls will impress you with the power and depth of nature’s connections.

The Shiretoko Peninsula is located in the northeastern part of Hokkaido, and contains sheer cliffs, wetlands and lakes, and steep mountains of about 1,500m formed by volcanic activity. The World Heritage property is an area of approximately 71,100 ha that includes Shiretoko Peninsula, from the central part to the Shiretoko Cape at the tip, and the surrounding ocean.

Source: Ministry of the Environment  https://www.env.go.jp/nature/isan/worldheritage/en/index.html 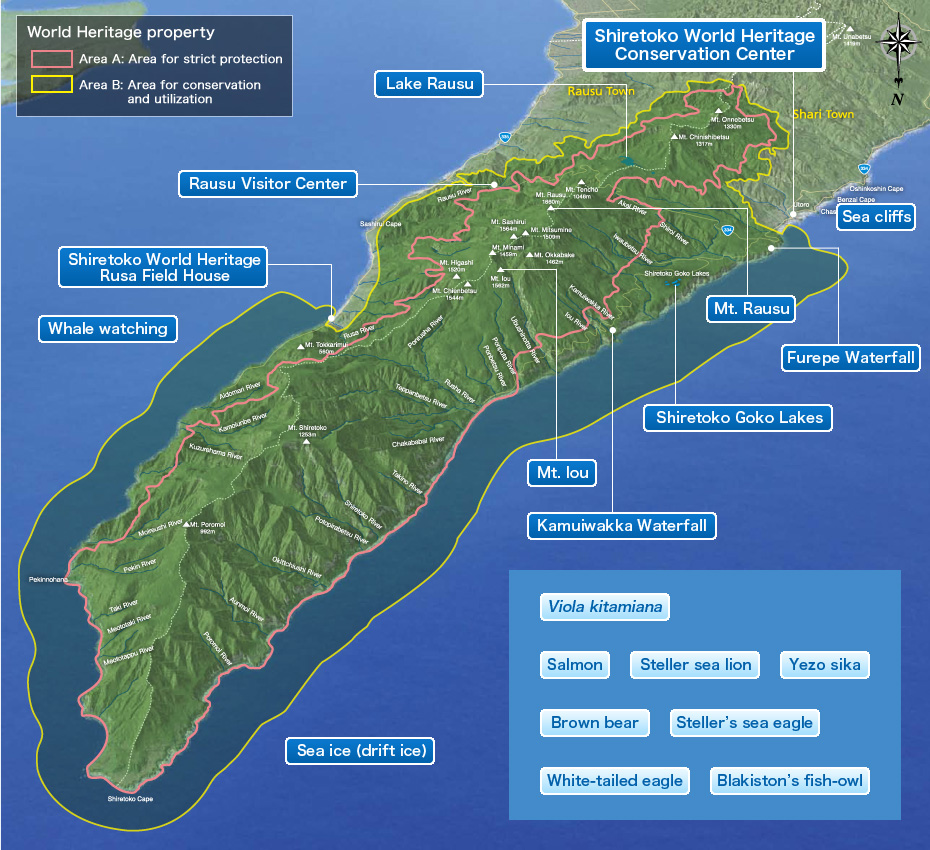 National parks are parks that are designated and managed by the government for the purpose of protecting nature. There are six national parks in Hokkaido. Each one is a completely different natural system, and offers a close look at hot springs, flora and fauna.

Daisetsuzan National Park is located in the central part of Hokkaido. Sometimes referred to as the roof of Hokkaido, the area designated as a national park includes the Daisetsuzan volcanic group that culminates in Mt. Asahidake (Hokkaido’s highest peak at 2,291 m above sea level), other magnificent peaks such as Mt. Tomuraushi, Tokachi Mountain Range and Ishikari Mountain Range, as well as the sources of the Ishikari River and Tokachi River, which are representative landmarks of Hokkaido。
The average elevation of the mountainous regions is approximately 2,000 m. However, their higher latitude gives them an alpine environment that rivals 3000 m class peaks across the rest of Honshu. The vast mountain belt is covered with colorful alpine plants including endemic species such as Oxytropis japonica var. sericea and Lagotis yesoensis. The area is referred to by the Ainu people as Kamui Mintara or the “the playground of the Gods,” and its beautiful landscapes are a treat for mountain climbers. Among local treasures are rare animal species such as the Japanese pika and the Parnassius eversmanni daisetsuzzanus, which are said to have survived the ice age, as well as a Miyabe charr that is endemic to Lake Shikaribetsu.。

Source: Ministry of the Environment https://www.env.go.jp/park/daisetsu/index.html 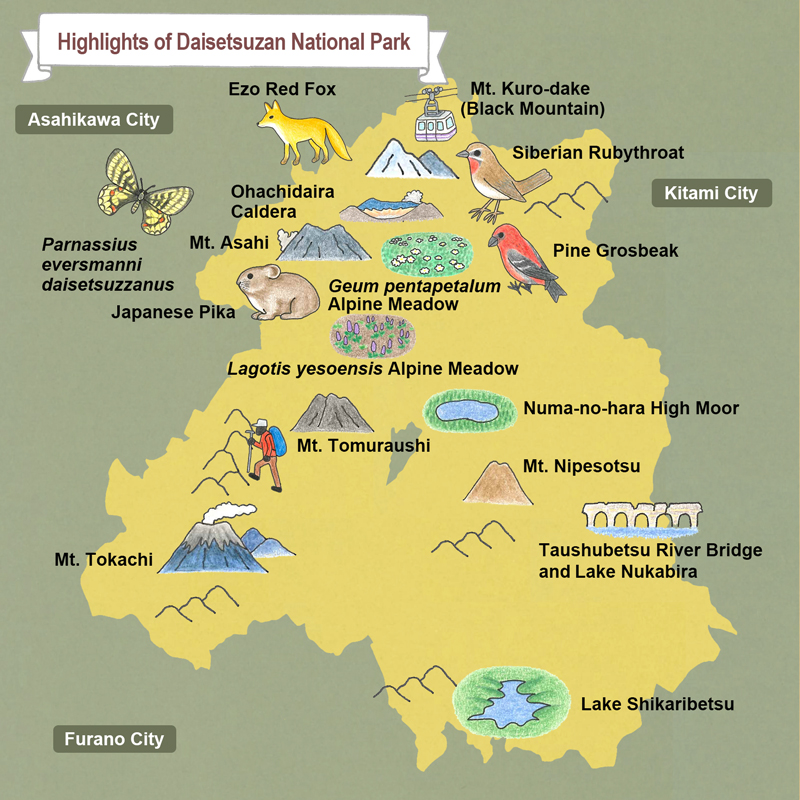 Located in the southwestern part of Hokkaido Prefecture, Shikotsu-Toya National Park is a park where visitors can see not only see two large caldera lakes -Lake Shikotsu and Lake Toya – but also variously shaped volcanoes and volcanic landforms -such as Mt. Yotei, Mt. Usuzan, and Mt. Tarumae. In addition to a large and diverse range of hot springs, much volcanic activity can also be observed, such as the jigoku (“hell”) phenomena of gasses belching from fumaroles, and the park can truly be called a “Living Volcano Museum”. One of the benefits of this volcanic activity is the popular and bustling hot springs tourism areas that are representative of Hokkaido Prefecture, including Noboribetsu, Lake Toya, and Jozankei. The breathtaking landscape comprising interweaving lakes, forests, and volcanoes soothes peoples hearts and minds. Lake Shikotsu is also famous for being at the northern limit for non-freezing lakes, and the distinctive deep blue color of the water surface is highly appealing to park visitors.
The park’s location close to central Sapporo City and Shin-Chitose Airport makes it easy for many people to visit. In addition to people visiting by private car or tour bus to see volcanic phenomena and experience nature, or on sightseeing tours for hot springs recreation, etc., people come to the park to climb mountains and observe the alpine vegetation.

Previous
Next
Source: Ministry of the Environment  https://www.env.go.jp/park/shikotsu/index.html 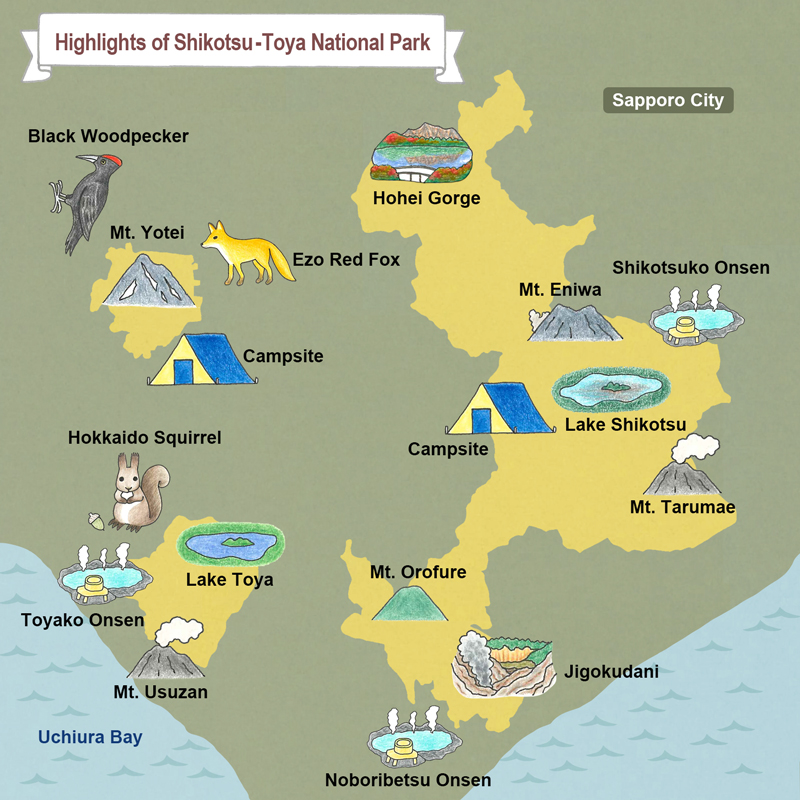 Located in the eastern part of Hokkaido, Akan-mashu National Park is one of the longest established parks in Hokkaido. Most of the park area is covered in natural forest comprising mainly subarctic mixed coniferous forest that is said to be some of the most primeval forests of all the national parks in Japan.
The foundation for Akan-mashu National Park comprises three caldera landforms –the Akan Caldera, Kussharo Caldera, and Mashu Caldera –which were formed by the volcanic activity of the Chishima Volcanic Zone. With several volcano-lake pairs in close proximity within a narrow space, the area is nationally valuable.
The park can be broadly divided into two areas: the Akan area and the mashu (Kawayu) area. In the Akan area, the sights to see include Mt. Meakan and Mt. Oakan which tower sedately over nearby lakes and reservoirs such as Lake Akan and Lake Onneto in a breathtaking landscape. In the mashu (Kawayu) area, the sights to see are Lake Mashu –one of the most transparent lakes in the world –as well as Lake Kussharo, which can be viewed from the surrounding mountain passes and peaks, and the colors of the forests, which transform with the seasons.

Previous
Next
Source: Ministry of the Environment https://www.env.go.jp/en/nature/nps/park/akan/index.html 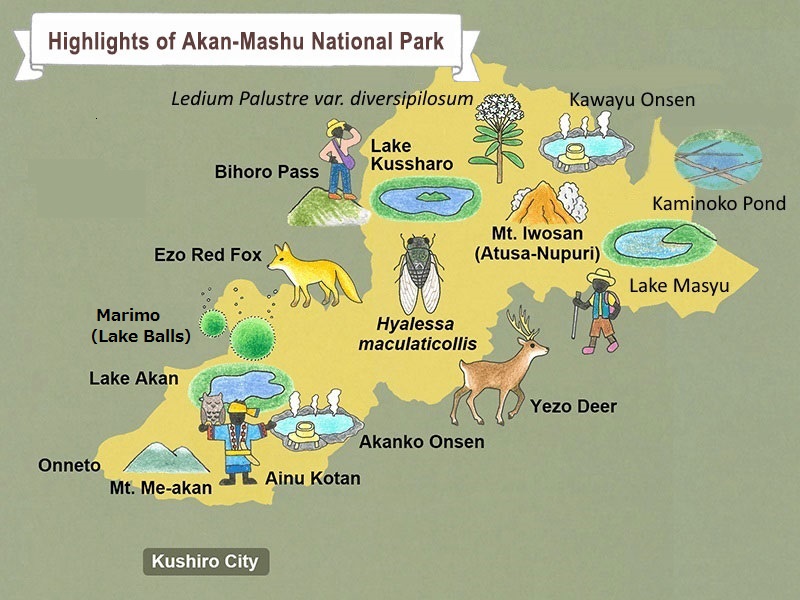 Encompassing the Kushiro River flowing through the eastern part of Hokkaido and its tributaries, Kushiroshitsugen National Park comprises Japan’s largest marsh, the Kushiro Marsh, and the surrounding mountainous area. The vast, untouched horizontal landscape is the park’s greatest attraction. It is also a valuable habitat for many flora and fauna, including the red-crowned crane, which has been designated a National Special Natural Monument.
Due to the difficulty of developing the area, the Kushiro Marsh was regarded as a useless area of land, but through the development of agricultural land due to the food shortage in the postwar period, development of urban areas, and logging of hilly areas, the marsh began to dry out and the area diminished. In response, local researchers and nature conservation groups persevered with activities aimed at changing the perceptions of the marsh’ value, with the result that the value was recognized internationally. In 1980, the Kushiro Marsh became the first marsh area in Japan to be designated a Ramsar site, and seven years later, the marsh was designated a national park.
The birth of Japan’s first national park centered on a marsh can be said to have been an event that carved a new page in the history of Japanese national parks as the result of local efforts to have the marsh–once regarded as “barren land” –recognized for its natural environment value.

Previous
Next
Source: Ministry of the Environment https://www.env.go.jp/en/nature/nps/park/kushiro/index.html

The name “Shiretoko” derives from the Ainu phrase siretok, meaning “End of the Earth,” and true to its name, the Shiretoko area is located on the most northeastern point of Japan (excluding the Northern Territories).
Shiretoko National Park is characterized by its majestically precipitous landscape, which was formed by volcanic activity and lava flows, and its richly diverse wildlife. In particular, the park is home to many large mammals, such as the brown bear and killer whale, and large birds of prey that are in danger of extinction. With these creatures at the top of the ecological chain, various wild animals interrelate and live strongly.
The diversity of these creatures and the links between ocean, river, and forest ecosystems in the area have been recognized, and in July 2005, Shiretoko was designated a World Natural Heritage site.

Previous
Next
Source: Ministry of the Environment https://www.env.go.jp/en/nature/nps/park/shiretoko/index.html 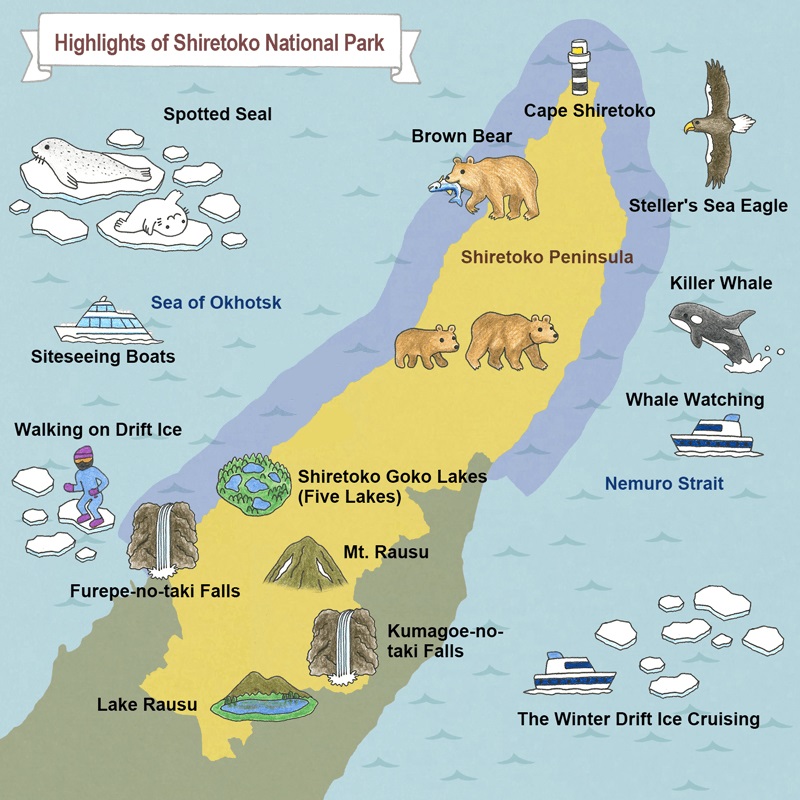 Rishiri-Rebun-Sarobetsu National Park is the northernmost national park in Japan, boasting a landscape with a variety of mountains, fields of flowers, sea cliffs, wetlands, and coastal sand dunes.
Affectionately referred to as Mt. Rishiri-Fuji, Mt. Rishiri is a beautiful cone-shaped mountain symbolic of the park. Visitors to Rebun-to Island can behold fields of alpine flora and bushes in the lowlands, including valuable alpine plants such as C. marcanthum Sw.var. rebunense. The Bakkai and Wakasakanai Shores present unique landscapes formed by rows of belt-like sand dunes dotted with lakes and reservoirs among sand dune forests of Quercus crispula Blume (oak) and Abies sachalinensis (fir) trees. On the Sarobetsu Plain, there is one of Japan’s largest high moors over the peat lands, making it an important stopping point of the migration for wild birds such as wild goose and ducks.

Previous
Next
Source: Ministry of the Environment https://www.env.go.jp/en/nature/nps/park/rishiri/index.html

A national park is a park designated by the government and managed by Hokkaido for the purpose of protecting nature. There are five national parks in Hokkaido. Each of the five parks has a different flavor, from the powerful to the scenic and beautiful.

The park which is located in the central part of the Oshima peninsula. In this area, there is Mt. Komagatake and the three lakes of Onuma, Lake Onuma, Lake Konuma, and Lake Junsainuma. You can view a Japanese garden-like scene with the beautiful forest and wetlands with Mt. Komagatake.

A park facing the Sea of Japan on the West Hokkaido side. It is a large area separated into 3 districts, including first the Niseko district, second the Shakotan and Otaru district, and third the marine area.
・The Niseko district has a world-famous ski resort and hot springs.
・The Shakotan and Otaru district is famous for camping, fishing, sea bathing and has strangely shaped rocks and reefs here and there.
・The marine area has Cape Kamui, and Cape Shakotan as well as many connected sheer rocks.

A park facing the Sea of Japan on the West Hokkaido side. Composed of places including Mount Shokanbetsu, the Uryunuma Marshland, the Ofu area, Teuri Island, and Yagishiri Island. Viewing the grandeur of the Sea of Japan from the peak of Mount Shokanbetsu is exceptional. In addition, the 850 meter altitude Uryunuma Marshland is a high altitude marshland with 150 varieties of flowers that bloom. Teuri Island is famous for the black-tailed gull.

Japan’s biggest quasi-national park which is said to be the backbone of Hokkaido centered around the Hidaka Mountain Range. It’s Hokkaido’s most untouched area, a wild area with mountain trails not maintained. The rich nature can only exist in such primitive conditions. This keywords for this area are Cape Erimo, Mount Apoi, Geopark, the Hidaka Mountain Range, and Mount Poroshiri.

Parks in the northeastern part of Hokkaido, facing the Okhotsk coast. In this area, colorful flowers bloom beautifully from about June in the plant colonies called the Koshimizu natural flower garden, and Wakka natural flower garden. In addition, there are wetlands such as Lake Saroma, Lake Abashiri, Lake Tofutsu, and there are viewpoints such as Mount Tento of Abashiri, and Cape Notoro.

There are two high quality geoparks (earth parks) in Hokkaido based on UNESCO standards. Both are scenic and deeply connected to volcanic activity.

One of the world Geoparks of the two in Hokkaido. You can sense nature up close at this park where the land has volcanic activity in this area focused around Mount Usu and Showa-Shinzan.。

One of the world Geoparks of the two in Hokkaido. You can sense the valleys and alpine plants of the land in this park centered around Mount Apoi, Samani Seaside, and Hidaka Yabakei Gorge.

Following after national park, and quasi-national park is a park representing Hokkaido with its natural scenery. Natural parks designated and managed by Hokkaido.

Wetlands Registered Under the Ramsar Convention

Wetlands, ponds, etc. that are internationally registered as waterfowl habitats